On any given day Shawn can be seen driving around Sooke and southern Vancouver Island in his work truck with the mobile welding unit working on new construction or servicing everything from logging equipment to metal gates.   The day starts early for him and he is often in the shop by seven in the morning and some days doesn’t leave until after eight at night. The days are long and the work can be hard and dirty, but he loves every minute of it. One of the other things that Shawn has a passion for is old cars and motorcycles. When he gets a minute to himself you might also see him cruising through town in his eye-catching 1931 Model A Tudor named Goldie, the 1950 Ford Panel called Chiquita with the Driver’s Welding logo on the side, or Miss Daisy\’s ride, Skinny Bitch the 1931 model A pickup. This man loves to drive and it seems he was born to do it. 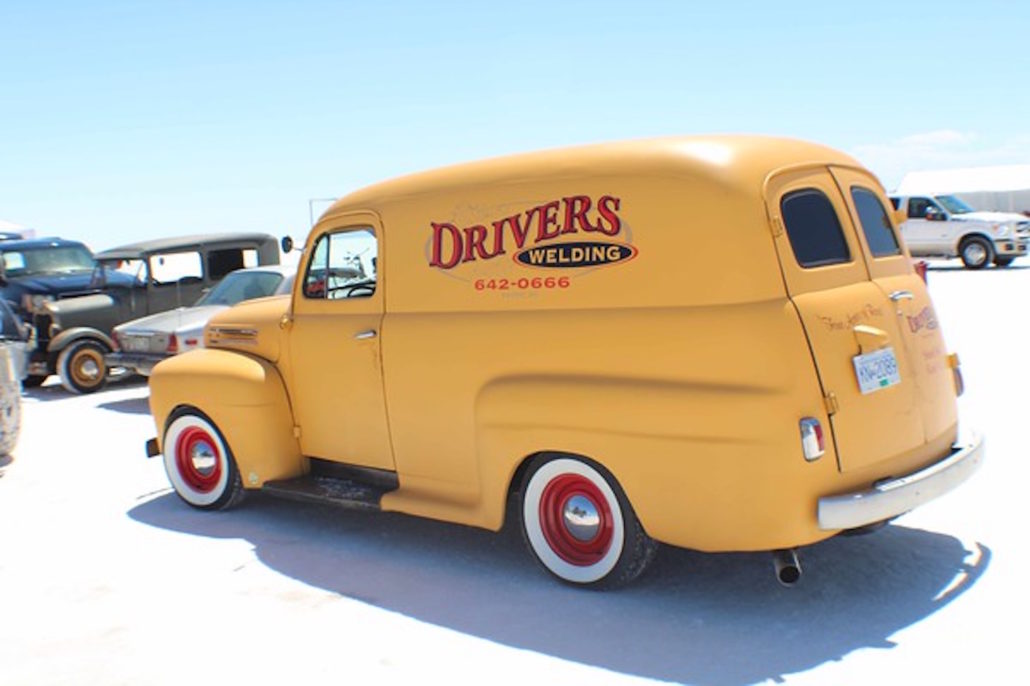 Shawn has been going to the land speed races at The Bonneville Salt Flats in northwestern Utah for the past ten years to see the cars and watch the men and women race down the salt chasing land speed records and fulfilling their dreams. The variety of cars there is unbelievable and everything from backyard builds to racecars with hundreds of thousands invested in them line up for their turn to fly across the salt. Last year a chance meeting with a fellow Canadian from the prairies, while we ate lunch on the Salt changed everything. Claude is a nitro racer who grew up on the prairies and there was an instant connection between him and Shawn and they soon realized they had a lot of old friends in common.  The next thing you know, we are off to California with our good friend Don Juan from Pheonix, who was so excited he followed us there. We stopped at Claude’s place in California and had a wonderful visit with him and his wife Lisa. While we were there Claude showed us a record holding 53 Studebaker that had raced on the salt and before we left Shawn and Claude had made a deal. Shawn traded his 62 Savoy 426 Hemi gasser drag car for Claude’s 53 Studebaker Salt Racer, a 38 Morris race car, and a sleek black 55 Studebaker. To say Shawn was excited is an understatement! Having his very own Salt car was a dream come true. For me the black 55 is like a little black dress, every woman should have one.  The Morris is well,  just fun on four wheels and will be undergoing its own makeover this winter and we will be documenting and posting the progress as we go.

The 53 Studebaker, was formerly raced on the Salt by Gary Hart.   Gary found the car in 2001 in a field full of Studebakers, took it home and turned it into a race car in the shop on his property in Springfield Missouri.  Gary set the first record for this car in 2002 at 206 miles per hour on his first trip to the Salt.  He beat that record the next year and continued to set records until 2008 when he set a new record of 240 miles per hour that still stands today.  His last race with the car was in 2009 where his first pass was 248 miles per hour and then he ran into trouble with the oil pan and could not complete the second pass to back the record up.  The car had been sitting since then.  So this car that started its journey to the Salt sitting in a field was reborn in Gary\’s metal shop in Missouri,  spent some time in Northern California with Claude and ended up in Sooke BC where it has been given a complete update and makeover by Shawn and the crew at Driver\’s in an old converted horse barn.